One cherry pie in four years? Sometimes it’s the price we pay for our green thumb addictions. But when you plant a tree the reasons are many. We wanted to plant an orchard, of sorts, and we started with a cherry and a plum. If you’re only interested in the end result of the fancy pie, you can jump to The Prize Pie. If you are interested in the four-year journey, read on!

As an Amazon Associate I earn from qualifying purchases.

Starting Out with Bare Roots

I’m not one that likes to empty my bank account for larger, more mature trees. All of our trees have been purchased bare root and rarely cost over $100. If you want to start this way, consider the limitations before you buy.

First, bare root trees are only available in the Spring. They are trees that have been stored in the perfect conditions for Spring planting. The cherry tree we bought was between 4 and 5 feet tall and a variety that we knew would grow well in our climate. We chose the Meteor Cherry variety because of its hardiness and also because it tolerates varying soil pH levels. This was essential for us since our soil pH sits close to 8.5 and we always have to keep that in mind.

Bare root trees should not be leafing out when you buy them so get there early. Our local nursery almost always has a bare root sale so they have discounted their prices even more during at least one week of the bare root season. Realize that these trees should come to you already pruned so there is nothing you should have to do to the branches. 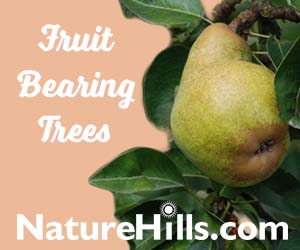 In theory, the roots have been pruned before you purchased the tree, but you’ll need to inspect them carefully just in case. Remove any roots that are broken or look unhealthy. Unhealthy roots are soft and you should prune them back with clean shears before planting. Roots that are crossing over each other should also be pruned. I have also pruned roots to make them fit in the hole better, although the hole should be tailored to the root ball, so the need for this should be minimal.

Make sure that your tree has its bare roots happily soaking in water before you prepare the hole. Soaking it overnight in a large bucket will help prepare it for planting. I also add UltraGreen Vitamin B1 Plant Starter by Lilly Miller to the water for the overnight soak. The first year is all about growing roots so any additives should be used for that purpose and not much else.

Measure the root ball from the base of the graft to the lowest most point of the root ball and dig your hole that deep. It should be no deeper than that because the roots will grow out more than down. For this reason, the hole should be about twice as wide as the root ball to make it easier for the roots to grow horizontally.

Our Meteor Cherry tree was quite small and needed no support after we planted it. Normally, a six to seven foot bare root tree should be staked for extra support during its first year.

Attack of the Aphids

Right after planting, the tree leafed out well after a few flowers appeared. We didn’t expect a cherry crop that first year so it was no worries that the flowers were few. It was the second year that became interesting.

The flowers of this tree come out before the leaves pop and it put on a lovely display the second year. About a month after the leaves were full and healthy, we noticed something on the new growth at the top of the tree. After doing a little research, we discovered that what we had was an invasion of the dreaded aphids. With many different kinds of aphids, these were black cherry aphids and attacked with a vengeance. These nasty little critters multiply like gang busters and can turn into a major invasion almost overnight. They cause the leaves to curl up as they suck the life right out of them. Sometimes it’s the ants that may alert you to an aphid invasion. Ants will actually farm the aphids for the sugary dew that they produce. The ants will be marching up and down the tree and its branches patrolling for any pests that may want to go after their herd of aphids.

Luckily, the best solution is the most environmentally friendly as well. Water. The aphids are easily removed with a stream of water from the hose. This became a morning ritual if we wanted to save the tree. They had infested almost every branch starting from the top of the tree, because if you’re an aphid, you’d want the most succulent and youngest growth to do your dastardly deeds.

When we first started our water torture aphid treatment, it took 15-30 minutes with hose end nozzle set on “jet,” to blast the buggers off the leaves. We would inspect every branch, which luckily wasn’t too bad since the tree was still fairly small. After about a week of spraying the leaves every morning, we went to water blasting every other day along with a daily inspection to make sure the nasty suckers weren’t taking hold again. The third week, when it was obvious that some of the leaves were not going to recover, we started pruning. We only removed down to the where the leaves were no longer shriveled and curled. Because the infestation had been so severe, we removed several inches from about ten branches.

We continued to diligently inspect this poor stressed tree for the rest of the season. Of course, that chore was much more suited to my husband, John, since I quickly become negligent when it looks like things are under control.

The next year we found more aphids but at least we caught it earlier and were able to control it much faster. No pruning was needed that year, though we did have a problem with the hose. That was the year that we had the German Shorthaired Pointer (GSP) puppy who loved hoses. Due to our negligence, instead of putting the hose away every day, we tried to roll it up where she couldn’t reach it. When she grew stronger and more bold, she would always find a way to grab an end and chew it through. By the time the aphids were under control, the hose was in about twenty different pieces.

It was also the year that we were so distracted by work that we forgot to pick cherries. The birds had a feast, though, and so at least they benefited from our spotty efforts.

Finally we had an incredible show of white, fragrant flowers this spring. We pruned the tree lightly before the flowers came out just to open it up and remove the branches that were overlapping each other.

We saw no aphids at all and the cherries were forming like never before. We considered adding something to keep the birds away, but then decided that there were plenty of fruit for all of us.

As the cherries matured we’d snack on them when we were out in the yard. They are quite tart but growing sweet cherries in our climate is very challenging. Sour cherries are tasty anyway and great for making pies. That’s when John decided it was time for his cherry pie.

I’ve never been a cherry pie fan so the baking was completely his responsibility. I would try it, of course, because how else could I critique his baking abilities? My contribution was to pick the cherries which I did by gently pulling and squeezing out the pit so that the pit was left on the tree. The only problem was that this would drip juice down my arm and eventually onto the back of the GSP sniffing around at my feet.

I was easily able to pick the four and a half cups of cherries that John needed for the pie. It was a bit of a sticky job, though.  I followed it up with a bath for the dog and a shower for myself. The rest of the pie-making duties were all up to John.

He carefully went through all the cherries to make sure that no pits were left. He used this recipe as a reference, https://sallysbakingaddiction.com/cherry-pie/, though he is one of those who can never stick exactly to a recipe.

What did he change? Well, we aren’t much for making pie dough from scratch, so he bought ready made pie dough from the store. The rest of the recipe was very close, although we have been substituting monk fruit sweetener in most of our baking for some time, so that was a difference as well.

The baking went swimmingly, especially since all I did was watch. I suggested to pre-back the bottom of the pie shell, and boy was that a mistake. If you are going to make a cherry pie from scratch, don’t bother pre-baking the crust. First, the filling has corn starch in it so it really doesn’t leak juices like you would expect. And two, if you want to do a lattice crust on the top of the pie, then your strips for the lattice won’t adhere to the pre-baked shell. Lesson learned. The pie still came out looking pretty good, don’t you think so?

After four years of waiting for a cherry pie, I have to say that it was mighty tasty. We like our pies (and our cranberry sauce) a bit on the tart side so John did not add much more sugar than the recipe recommended. The taste was nice and tart and balanced well with some sweetened whipped cream on top. Wow. The ripe cherries remaining on the tree we purposely left for the birds and they’ve been having a feast, scattering the pits all over the yard for the lawnmower to hit. Such is life with a tiny backyard orchard. We recommend trying your own homemade cherry pie, even if you don’t have your own tree. You can surely find plenty of cherries at your local farmer’s market when they are in season. Leave a comment below with your own experiences with this tasty dessert.